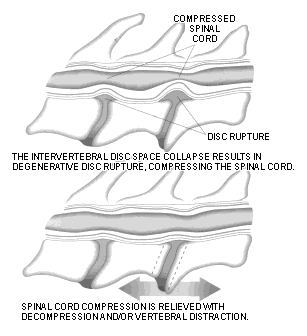 What is wobbler syndrome?

Wobbler syndrome is a neurologic disease of dogs that affects their spine in the neck region. It is a very important and common cause of neurologic disability in large breed dogs.

Are there other names for Wobbler syndrome?

What are the signs of Wobbler syndrome?

Dogs with wobbler syndrome typically have a “wobbly” gait mostly in the back end (thus the name “wobblers”). This wobbly gait may only be visible in slippery floors and when the dog walks slowly. They may walk with their head down, which is usually a sign of pain. In the more advanced stages of the disease the problems become obvious in all four legs, and they may have trouble getting up, appear very weak, and even “buckle over” with the front legs. Approximately 5% of dogs with wobblers may become acutely paralyzed in all four legs.

Which kind of dog gets wobbler syndrome?

Wobbler syndrome is primarily a disease of large and giant breed dogs. Small breed dogs occasionally get the disease but it is uncommon. In a study with 104 dogs with wobblers only 5 were small dogs.

What are the breeds most commonly affected?

Dobermans and Great Danes are the breeds most commonly affected. A recent survey of the Veterinary Medical Database showed that 4.2% of Great Danes have wobblers, whereas the disease is present in 5.5% of Dobermans. Dobermans usually have the classic form of the disease in large breed dogs whereas Great Danes have the typical form seen in Giant breeds. Other breeds are Rottweilers, Mastiffs, Weimaraners, German Shepherds, Bernese Mountain dogs, Swiss Mountain dogs, but any large or giant breed dog can have the disease.

Is the disease the same in Dobermans and Great Danes?

Generally speaking no, the disease tends to be different in these breeds. Dobermans usually have the disease when they are middle aged to older (mean age 6 years), whereas Great Danes are typically younger (mean age 3 years).

What causes the disease?

We don’t know yet what exactly causes the disease. Many people believe that there is a genetic basis for the disease, which may well be true, but the evidence for genetics is still not clear. We are investigating the genetics of the disease in Dobermans and have plans to study it in Great Danes in the future.

Why do they have the neurological signs or pain?

The neurological signs happen because affected dogs typically have spinal cord compression. The compression can be caused by a combination of a small spinal canal with disc herniation (as commonly seen in large breeds such as the Doberman), or a small spinal canal secondary to bony changes impinging upon the spinal cord. The spinal nerves or nerve roots can also be compressed. When the nerves are compressed this causes a great deal of pain/discomfort.

How can I find out if my dog has wobblers?

Your dog has to be first examined by your Veterinarian. During the examination he/she will perform a physical and a neurological examination to find out if the reason for the difficulty in walking can really be attributed to a neck/neurologic problem.

To specifically diagnose the disease we need to do some imaging tests. We typically do X-rays first to see if we can identify any obvious bony lesion or diagnose other diseases that can mimic wobbler syndrome. To confirm the disease more advanced imaging tests are required. In the past we used to do myelograms (an X-ray with dye injected around the spinal cord). This technique is rarely used these days because there are better, more sensitive tests. The best test is an MRI (magnetic resonance imaging) (when we compared myelogram and MRI head to head we saw that MRI was clearly superior). MRI is also very safe. We do not see any neurological worsening after MRIs, whereas this happened frequently with myelograms (typically the worsening was mild and temporary). A CAT scan (computed tomography) is a good test too, but probably not as good as the MRI. Typically these tests are done by specialists in larger Hospitals or specialty clinics.

What are the treatment options?

Dogs can be treated medically or surgically. Medical management usually consists on the use of anti-inflammatory drugs (steroidals or non-steroidals) with restricted activity. Because they have a neck problem, neck leashes should not be used, and a chest harness is strongly recommended.

How is surgery done?

Surgery can be done in many different ways. There are at least 21 different types of surgery to treat wobbler syndrome. Several factors must be taken into consideration when deciding on the type of surgical treatment, for example how severe are the symptoms, how many lesions are present in the spine, how severe is(are) the spinal lesion(s), the presence of other concurrent medical conditions, such as dilated cardiomyopathy, etc. The attending Neurologist or Surgeon will discuss the options with owner, taking into consideration the short and long term expectations of the family.

What is the success of the treatment?

Would wobblers shorten the life expectancy of my dog?

It might. Again, it depends on how severe are the spinal lesions, how much neurological impairment is present and the type of treatment. Typically, based on our studies, the mean survival time of dogs with wobblers is approximately 4 years. This survival is the same whether the dogs is treated medically or surgically.

Are you doing any studies at Ohio State?